It's fall, and that means that Pumpkin Flavored Everything is here. Your Instragram feed is going to be chock full of white girls in yoga pants and Ugg boots with their Pumpkin Spice Mega Latte Frapps from Starbucks, and every bakery you ever visit for the next nine weeks will be all OMG PUMPKIN STUFFS YAY.

Problem is, most of this stuff is not gluten free. Okay, the muffins, yeah, that's obvious. But a lot of other things, like some of the flavorings that pretend to be pumpkin, are not made of straight up pumpkin, but have gluten in them. So you gotta watch out for stealthy gluten sneaking into your Pumpkin Whatevers.

But no worries, because I'm about to hook you up with the best ever pumpkin spice cheesecake, and it's totally GF. 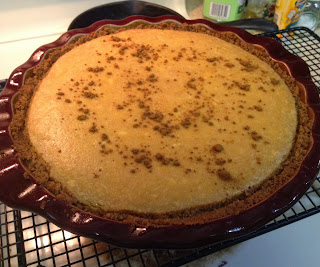 Melt the butter in your microwave, and run the graham crackers through your food processor until they're finely ground. Mix them together in a bowl, and add the sugar. Press this delicious mixture into the bottom and sides of a lightly greased pie plate.

Mix everything together, holding about 1/2 tsp of the pie spice blend back. Once you have it all mixed up into gooey pumpkiny goodness, fold it into your prepared crust. Use that remaining 1/2 tsp of pie spice blend to sprinkle over the top. Bake your cheesecake at 375 for about 45 minutes. I found that if I cover the top with a tent of aluminum foil, it bakes well but doesn't end up too dark. After removing from the oven, let your cheesecake cool - in fact, I'd recommend refrigerating it for about six hours so it will firm up nicely.

This is pretty rich, too, so even though you COULD slice it into eight pieces, I'd suggest going with twelve.

And then dig in, and have a moment of cheesy pumpkiny spicy bliss!


Like cheesecake but prefer peanut butter and chocolate to pumpkin? Check out the Buckeye Cheesecake instead!
Posted by Patti Wigington at 4:13 PM No comments: