This post originally appeared at Outside the Lines on June 10, 2011. But I'm having a hankering for donuts, which means you get to share some cakey donuty goodness with me all over again!

Donuts are awesome - they're a perfect snack when you need a quick sugar high, they make a great breakfast grab-n-go, and every once in a while, when you've been living on salads and fruit, a donut is the perfect decadent indulgence.
Unfortunately, they're also on the No List for those of us who have a gluten sensitivity. There are a couple of commercial GF donuts available -- Kinnikinnick's vanilla glazed ones are delicious, but they're a bit pricy. At $6 for a box of half a dozen, I'm paying a buck a donut. So I decided to see if I could come up with my own variation on the standard donut recipe, using stuff I already had in my pantry.
And I did.
And lo, it was tasty.
Gluten Free Donuts: 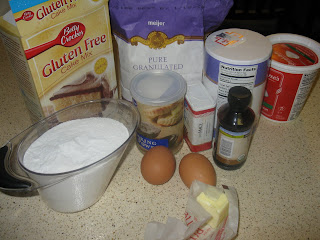 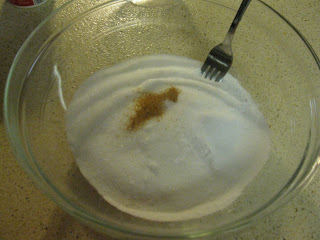 Preheat the oven to 425.
Dump all the dry ingredients in a bowl, and mix them up until they're loosely blended. 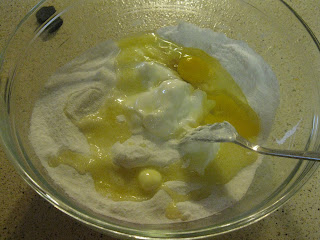 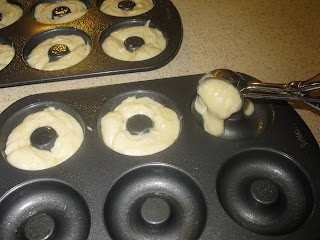 Spray a donut pan (or two) with cooking spray, and fill each donut cup about halfway with batter.
Note: If you fill it too high, the donut will end up baking over the hole, and you'll have weird little cupcakes instead of donuts. Trust me on this. 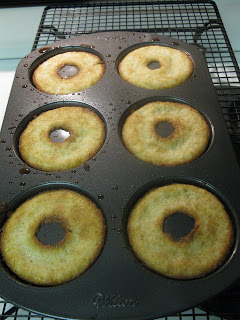 Bake at 425 for about ten minutes. Pull donuts from the oven when they're a nice light golden color. Don't overbake, or they'll get chewy.
Let them cool about five minutes in the pan. 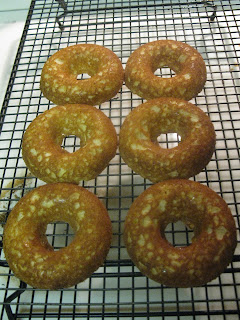 Flip donuts out onto a cooling rack, and let them sit another five minutes. See how pretty they are? 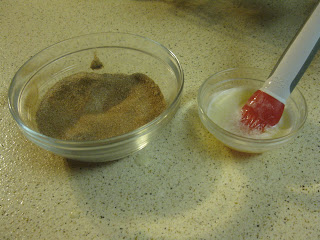 While your donuts are still warm, melt some butter, and blend together 1/2 Cup sugar, and1/4 C cinnamon.
Dip the top of the donuts in the melted butter, then roll them in the cinnamon sugar. 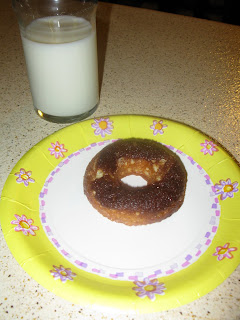 What do you get? An amazing and totally delicious cinnamon sugar donut. Eat it with a glass of milk, because it's even more fantastic.
Store them in an airtight container, or freeze 'em. I actually think they tasted better and softer the second day, but nothing beats a warm donut fresh from the oven.
This recipe makes about two dozen donuts, for the cost of a box of cake mix and some other stuff.
And your non GF-eating family members will enjoy them too, because they're cakey and awesome!
Posted by Patti Wigington at 3:03 PM No comments:

OMG you guys. I found the best veggie lunch snack ever. A co-worker always brings in tons of zucchini every summer because he and his wife can't eat it all, so I brought one home the other day (try walking out of a busy retail establishment with a big zucchini sticking out of the top of your purse some time, really, just try it). I had seen a recipe for zucchini chips and figured I'd make some, but the problem was that it called for bread crumbs.

Now, yeah, I could totally have used gluten free bread, run it through my handy dandy Ninja chopper, and had insta-crumbs.... but I don't usually keep any GF bread on hand. I just don't really like bread that much because it just makes me feel FULL, and I couldn't justify going to the store to buy a loaf that would end up just sitting in my freezer for weeks before I ate the rest of it.

I totally dig these things. They're tasty, and because they're made with rice flour they're nice and light. Toss a bunch in the chopper, and BOOM, pretzel crumbs. I also like a little more seasoning and flavor than what's in the original recipe, so I decided to jazz things up a bit. Okay, so on to the recipe... 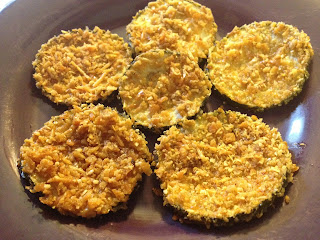 Preheat the oven to 425. Throw your zucchini slices in a big bowl, and add the olive oil. Toss the zucchini so each piece is well coated.

Bake for about 35 minutes, or until they're nice and firm. Give them an extra five to ten minutes if you need to, because no one likes mushy zucchini.

Honest, these are so good that even my kid whose sole vegetable is broccoli really liked them. Amazingly awesome snackage!

Posted by Patti Wigington at 11:49 AM No comments:

I spent ten years in the South, and my palate hasn't been the same since. I'll happily snarf down a plate of collards, a freshly steamed oyster, or a bowl of grits without batting an eye, despite the horror that such foods bring to my friends here in the Midwest. After all, many things that are popular food items in the South have a different impact in the rest of the country - I'm pretty sure none of my Ohio buddies can understand why at some point in human history someone cracked open an oyster and said, "Aw yeah, I can eat THAT."

One of the staples of Southern food, at least in the area in which I lived, was the hush puppy. Served up fried golden brown, little balls of cornmeal dough and onions are pretty much a standard on a table, especially if you're eating seafood. A plate of shrimp with a side of hush puppies is one of my favorites summertime meals ever.

Hushpuppies are made mostly with cornmeal - which has always been pretty cheap. A friend of mine who was a cook in a South Carolina restaurant told me that his great-something granddaddy ate hush puppies regularly during the Civil War. Because no matter how bad the Confederate army was starving, someone could usually find a bag of corn meal. Fry it up, and you've got sustenance. I've heard a story that the name "hush puppy" came from soldiers tossing their fried up cornbread balls to dogs to keep them quiet, but I'm skeptical about that tale - if you're cold, hungry, and not even wearing a decent pair of shoes, I doubt that you'd spare a chunk of warm cornmeal for the dogs.

At any rate, whatever their origin, hush puppies are super easy to make, and they are OMG DELICIOUS. You can bang out a batch in about twenty to thirty minutes, depending on how much you're making. Now, when I make hush puppies I tend to (a) keep it simple and (b) not really measure stuff. This is a very basic hush puppy recipe that's totally gluten free, and you can adapt it by adding other things into the mix, like chopped jalapenos or a bit of cheese. Go crazy with it.

Seriously, these are great. Even my kid who doesn't like onion loves these. Hence the name Hell Yeah Hush Puppies. 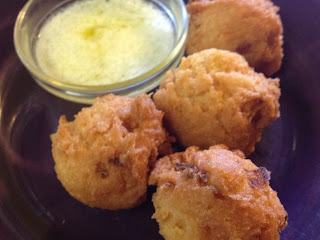 Before you get started, heat some cooking oil on the stovetop. A note about oil - the kind you use will impact the flavor of the hush puppies. For a sweeter hush puppy, I like to use a blend of vegetable oil with coconut oil. Anyway, you'll need:

Mix the eggs, sugar and onion together in a bowl until it's all smooth (or at least as smooth as you can get with onion chunkers in it). Then add:

1/2 C your favorite GF baking mix
1/2 C gluten-free cornmeal (I like Bob's Red Mill, but use what you got)
Salt and pepper to taste

Stir them up until it's a nice thick gloppy mix. Using a spoon or a dough scoop (spray it with cooking spray to keep the dough from sticking!), drop little balls of dough into your oil. Be sure to turn them so they evenly, and let them get to a nice golden brown. My spouse likes his hush puppies crunchy, but I like mine a little on the softer side. Play around and see which kind you like best.

Once your hush puppies are brown, remove from oil, let them dry on a paper towel, and dig in. Traditionally, hush puppies are eaten plain or dipped in melted butter, but I've found a nice blend of barbeque sauce mixed with sour cream is another great dip. This recipe should make you about 20 - 24 hush puppies, depending on the size of your dough balls. Experiment, play, and celebrate your puppies!
Posted by Patti Wigington at 4:32 PM 2 comments: