If you've ever attended a potluck in the midwest, a cookout in the suburbs, or a church supper anywhere in the American south, you've probably been subjected to the dish known as Green Bean Casserole. I've always hated the traditional Green Bean Casserole, for a variety of reasons: (1) most people use frozen green beans, which have very little flavor, (2) I think Cream of Mushroom soup is vile, and (3) those french fried onions are crispy when they first come out of the can but end up soggy after sitting in a casserole dish for a while.

Interesting fun fact: did you know that the Green Bean Casserole was specifically invented by the Campbell's Soup Company in the 1950s, so American housewives would have a use for all those cans of Cream of Mushroom soup?

Anyway, I do love me some fresh green beans, so I decided that for this year's holiday side dish, I'd bring my own gluten-free version of Green Bean Casserole, made with fresh beans, shiitake mushrooms, and caramelized onions. I knew it could be done, it was just a matter of playing around with it a little bit - and the result was pretty damn tasty. The green beans kept their flavor and a bit of their crunch, and the onions were perfect. 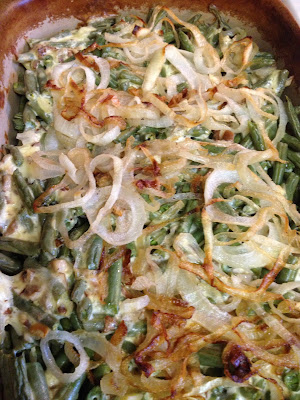 Preheat your oven to 350 degrees, and grease a casserole dish. If you've washed and snapped your beans into little pieces, just go ahead and dump them in the casserole dish. You'll add everything else later.

Heat a couple of tablespoons vegetable oil in a large skillet, and then add the onion slices. Let them cook a while, until they become transparent and soft. For a good caramelized onion, I'll leave them on low heat for about half an hour, just simmering away. Add a bit of salt and pepper for seasoning. Once a few of them start to turn golden, take them off the heat.

Meanwhile, while your onions are cooking, make your mushroom sauce - this is so much way better than that stuff in a can. Beat the egg in a small bowl, and add the sour cream and whipping cream. Blend until smooth, and then stir in the Parmesan cheese and garlic. Finally, add the chopped mushrooms, and mix well.

Pour your mushroom sauce over the green beans, and toss them all together. Top with the caramelized onions, and then bake for about 45 minutes. Prepare to impress your friends and family with your Way Better Than Theirs Green Bean Casserole.

Posted by Patti Wigington at 2:31 PM No comments: