If you live in Central Ohio - or if you're a fan of college football - you know that the Buckeye is kind of an Ohio Thing. We're all about our Bucks on Saturday afternoons in the fall. However, what not everyone knows is that the Buckeye is not just a football team, it's actually a nut - a horse chestnut that grows in a lot of midwestern states. Okay, so what does that have to do with cheesecake?

Well, there's a candy version of the Buckeye - you can't eat a horse chestnut, they're disgusting and also more than a little bit toxic. So instead, every fall, those of us who live in the land of the Scarlet and Gray make dozens and dozens of Buckeye candies - it's basically a ball of peanut butter and powdered sugar dipped in a chocolate coating. It's cute, it's easy to make, and it's delicious.

So. Thanksgiving rolls around at Chez In-Laws', and I know darn well there will be two pies. A pumpkin one and an apple one. Both are probably tasty, and both are a disaster if you have a gluten allergy. So I started pondering the idea of what I could make that was gluten free, but still seasonal and not apple or pumpkin.

Hence, the Buckeye cheesecake. It's quite possibly the most incredible thing I've ever come up with. I made the cheesecake part a day ahead so it could firm up before I topped it with ganache, but I probably didn't need to, because it firmed up nicely in just a couple of hours. I think this is going to be my new go-to dish when I need to bring a dessert, because it's melt-in-your-mouth amazing. 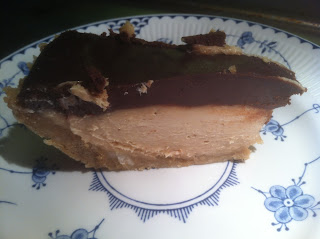 Blend the crumbs, butter, and sugar together, and press into a lightly greased pie plate to form the crust. I've found that if you're grinding up your own graham cracker crumbs, one box of Kinnikinnick's S'moreables graham cracker cookies is exactly the right amount for a pie crust recipe.

Soften the cream cheese in the microwave. Add the peanut butter, heavy cream, brown sugar and vanilla, and then mix on medium speed until nice and creamy. Spoon it into your pie crust. Refrigerate until firm - I let mine sit overnight, but it was actually pretty firm in just a couple of hours.

This is just a basic ganache topping. Heat the cream in a saucepan, stirring so that it doesn't burn. Add the chocolate, and whisk until melted - it's going to be easier if you chop your chocolate into small pieces. Add a pinch of salt, and continue stirring until smooth. Remove from heat for ten minutes, then pour over the cheesecake, spreading out until you reach the edges. Refrigerate for an hour or so to let the chocolate cool.

All kidding aside, this was one of the most spectacular things I've eaten in ages. I'll even go as far as to say it makes twelve servings, because it's very rich, and if you slice that cheesecake into just eight pieces, you'll slide into a delicious Buckeye-induced coma.

Posted by Patti Wigington at 11:25 AM No comments: 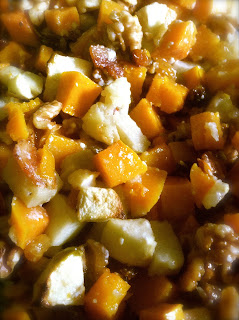 This is absolutely my favorite thing to bake during the fall harvest season. In fact, I can whip up a batch of this stuff and get at least four meals out of it for myself (no vending machine lunches at work for this girl!), or it makes a great side dish for any meal. I’ll probably bring it to Thanksgiving dinner, just so I don’t have to eat gravy-less mashed potatoes.

I make this with butternut squash because it’s got such a light, sweet flavor. It also works nicely with delicatas, but you need more than one. You could substitute any other squash you love, or even pumpkin for a variation in flavor. Skip the bacon for a vegetarian option.

Mix everything together in a bowl. Dump into a really big greased casserole dish. Bake at 350 for about 45 - 60 minutes, mixing occasionally. Seriously, it’s that easy, and it’s SO GOOD.
Posted by Patti Wigington at 9:14 AM 1 comment: