As some of you may be aware, when I'm not being all fabulous on the Interwebz, I also work as a digital sales lead for Barnes & Noble. This gives me plenty of options to see what sort of gluten-free cookbooks are out there, but until recently it left me with very limited options as far as snackage over in the Barnes & Noble Cafe.

Last week, they added a Flourless Chocolate Torte to the bake case, from Sweet Streets, and OMG let me tell you - that stuff is goooooood. It's rich and moist and filling and everything a torte should be, and at $3.50 a slice, totally worth it. You can even buy an entire torte for $35 in my store, although prices may vary regionally.

One thing to keep in mind - I suspect the reason the Flourless Chocolate Torte is not officially billed as gluten-free is because it is stored in a bake case full of gluten-containing items, which means you could be at risk for cross contamination (if you order it directly from Sweet Streets, it is in fact labeled as GF). However, if you're like me and lucky enough not to have a problem with cross contamination, I highly recommend checking this out next time you're at a Barnes and Noble and looking for something to nom on.
Posted by Patti Wigington at 8:41 AM No comments:

As most of you know, I'm not always a fan of commercially packaged gluten-free bread stuff. This is because for many years, most of it tasted like drywall, and all the peanut butter in the world wasn't gonna make it any better. Lately, however, a few companies have emerged at the top of the Hey That's Good Stuff list, and so every once in a while I decide to venture into the world of breads Not Baked By Me. And occasionally, I'm pleasantly surprised. 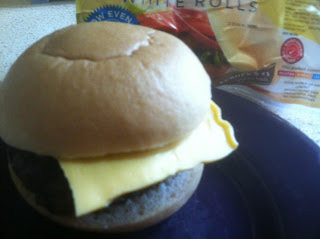 I had seen Schar's products in the GF section at my local Meijer (which, by the way, has a TON of good GF stuff) but never bought them. Frankly, the vacuum packaging makes them look like the breads have been hermetically sealed so that they can be re-opened and eaten after someone finds them in a time capsule in 2165.

(I should note that this is done so the rolls can be made without any preservatives, so it's actually a pretty good thing)

Weird plastic bagging notwithstanding, I had heard positive rumblings about Schar's stuff, so I figured I'd give it a shot. Honestly, I'm tired of eating hamburgers on my GF English Muffins, so I decided the Classic White Bread Rolls would be a good place to start.

I opened the package, heard a soft whoosh of air, and prepared for the worst. Much to my delight, the rolls were nice and soft. They sliced nicely, without mushing up. I warmed it up just a little for a burger, and - with a little trepidation - took a bite.

Holy cow. Great flavor, nice texture. A little more dense than its non-GF counterparts, but that's to be expected. They're actually quite filling - I didn't even finish my burger, only got about 2/3 of the way through before I was stuffed. But the best part was the taste - made with primarily rice flour and millet, they have a lightly grainy flavor that's yummy but not overwhelming.

Definitely worth buying, and versatile enough that you could use for sandwich buns, butter rolls, or other snackage.
Posted by Patti Wigington at 11:22 AM No comments: