Make Your Own Mayo

So any time I make a comment about making my own mayonnaise, inevitably I get 87 emails from friends along the lines of OMG YOU MAKE YOUR OWN MAYO NOM NOM NOM, so rather than sending out the same response over and over, I figured I'd just post the recipe here.


Thus, homemade mayo. I like to jazz it up sometimes with things like curry powder, dill, and other good stuff, and I use it as a base for an amazing Remoulade sauce. 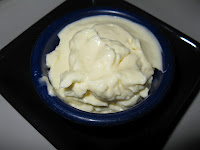 Add all of these to the bowl of your food processor, and blend together. Then slowly pour in 1 C. canola oil.

That's it. That's mayonnaise. This gives you about a cup and a half of delicious creamy mayonnaisey goodness, and it'll last you about two weeks in a tightly sealed container in your fridge. Try it. It kicks ass.
Posted by Patti Wigington at 2:10 PM No comments:

Betty Crocker has a new gluten-free cookbook out, and for a short time, you can order it online with a 15% discount applied at checkout. According to their description, "Betty Crocker Gluten-Free Cooking is an accessible, Approachable guide to eating gluten-free. With a mix of scratch and gluten-free mix-based recipes (using GM's new line of gluten-free mixes), this book helps today's busy families get food on the table and still meet their dietary restrictions."

You can get the discounted price through May 20 here: Betty Crocker GF Cooking
Posted by Patti Wigington at 9:46 AM No comments:

Hummus is one of those foods that doesn't last long in my house. Sure, we'll smear it on bread or use it to dip our veggies, but it's also pretty tempting to just stand there and eat it with a spoon. The best part about hummus? OMG SO EASY. 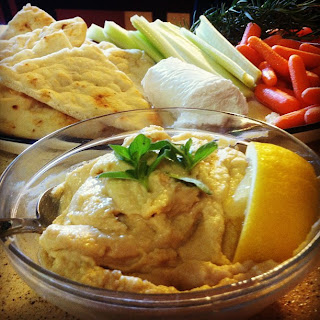 1 Can chickpeas, drained and rinsed
2 Tbs olive oil
As much garlic as you like, but I go crazy with 5 - 6 large cloves
1/4 C lemon juice
Pinch of salt
1/4 C Greek yogurt

Blend all of it together in your food processor. Do a quick taste test, and adjust anything that needs adjusting.

The Greek yogurt makes it nice and fluffy. If you use a vanilla Greek yogurt, you get a really tasty blend of sweet and savory flavors, and it really brings out the nuttiness of the chickpeas.

Serve it any way you like - I like it with some goat cheese and veggies on flatbread - but if you want to eat it with a spoon, go ahead. I won't tell anyone!

Posted by Patti Wigington at 4:48 PM No comments:

I like to make my own bread and rolls, but since I'm the only GF eater in the house, sometimes it's more work than I feel like putting into it. In a pinch, I like to have some pre-packaged bread mixes in my pantry - I can add some seasonings, a handful of cheese, and go crazy with it. Half an hour later, I have bread. Yay bread! 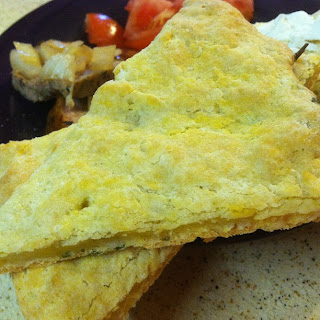 I had a coupon for Chebe's Gluten-Free All Purpose Bread Mix, and since I was in the mood for hummus, I thought it would be the perfect base for a big ol' honkin' piece of flatbread. If you're unfamiliar with Chebe, it's a Brazilian cheese bread made from tapioca flour. Add some oil, a couple of eggs, milk, and a bunch of cheese, and you're good to go.

I put some together the other night, but because I was going to eat it with hummus and goat cheese, I didn't want to make it with the suggested sharp cheddar. Instead, I omitted the cheese altogether, and blended in a little extra milk, some fresh rosemary and oregano out of my garden, and a clove of mushed garlic. After flattening it out into a big circle, I baked it until golden brown, and it was delicious.

I've used the same mix, with some variations, to make hamburger buns, biscuits, and breadsticks. It's adaptable, and has a nice light fluffy consistency.

Top it with hummus and goat cheese like I did, or dip it in olive oil and garlic. It's pretty darn tasty, and I'll buy it again, even without coupons!

This is kind of nifty. There's gluten found in a lot of medicines that you wouldn't even think about - both prescription and over-the-counter stuff. In fact, if you look at the ingredients list on your pill bottles, watch out for starches. If it doesn't say that it's made from tapioca or corn or some other grain, it may well be a wheat by-product. Also, a lot of the dextrose ingredients can be made from barley or wheat. As of now, the FDA doesn't require pharmaceutical companies to label their products as containing gluten.

Hopefully, that's about to change.

House members Tim Ryan and Nita Lowey have introduced the Gluten in Medication Identification Act of 2012 (HR 4972) which "requires that the label of drugs intended for human use contain a parenthetical statement identifying the source of any ingredient constituting or derived from a grain or starch-containing ingredient." The bill is supported by the Celiac Sprue Association, Gluten Intolerance Group, American Celiac Disease Alliance, National Foundation for Celiac Awareness, and Celiac Disease Foundation.

Posted by Patti Wigington at 9:00 AM No comments:

Domino's Pizza announced the other day that they will be making a gluten-free pizza available to customers. While this is a great thing if you order Domino's (I don't, because I have some issues with the company itself and I hate their sauce), Jane Anderson over at About Celiac Disease makes some pretty important points about whether or not you should spend your money on this pizza.

I'm fortunate enough that I don't have a problem with cross-contamination, and I have a non-celiac gluten sensitivity, but this is definitely something noteworthy if you have issues with either. Sounds like they're trying to make a conscientious effort, but didn't think things through all the way first.


Gluten-free: I do not think that word means what you think it means.
Posted by Patti Wigington at 8:41 AM No comments: